Creatine kinases (CKs) are important players in the energy homeostasis especially of cells with a high ATP turnover such as in brain and muscle. The cytosolic brain CK (CKB) and muscle CK (CKM) are two isoforms which, depending on the substrate concentrations, convert reversibly ATP and creatine (Cr) into creatine-phosphate (CrP) and ADP, forming togather with the mitochondrial isoforms an efficient ATP shuttle- and buffering system.

We have previously reported possible interaction of calmodulin (CaM) with CKB and the other isoforms (Herling et al., 2016) and showed that CaM binds in presence of Ca2+ to CKB with an affinity (KD) in the low micro-molar range. Kinetic measurements following ATP production by CKB in presence and absence of Ca2+-CaM revealed that the native positive cooperativity of the CK reaction is abolished by Ca2+-CaM binding, leading to an ~10 fold increase in ATP production at physiological CrP-concentrations. Another link between Ca2+ signaling and CKB has previously been reported where calmodulin-activated protein kinases N-terminally phosphorylate CKB that is then recruited to the ER-membrane but without changing its kinetics, suggesting a regulation by CaM through CKB through localization (Schlattner et al., 2016).

Recently we identified the CaM binding sites in CKB and CKM that are homologous, dynamic regions within the C-terminal domains in close proximity to the active sites. We succeeded in crystallizing the complexes of CaM with the peptides corresponding to the CaM binding sites of CKB and CKM. High resolution structures were obtained (1.2 Å and 1.4 Å, respectively), that show for both peptides a novel 1:2 (CaM:peptide) extended binding mode with CaM, though with different orientations of the peptides in the C-terminal domain (see figure). ITC studies confirm the binding modes in solution where each CaM-lobe independently can bind one peptide with affinities in the low micro-molar range. The new structural insights into the CaM-CKB/CKM interaction may help to explain how the the activities of CK in muscle and brain tissue can be regulated directly by CaM to provide increased amounts of ATP from CrP resources for high energy consuming processes during Ca2+ release. Furthermore the novel CaM binding mode opens new avenues for protein engineering and we are exploring possibilities to use this interaction as fusion proteins to locate and order small proteins within highly porous protein crystals as a system to determine structures based on X-ray diffraction. 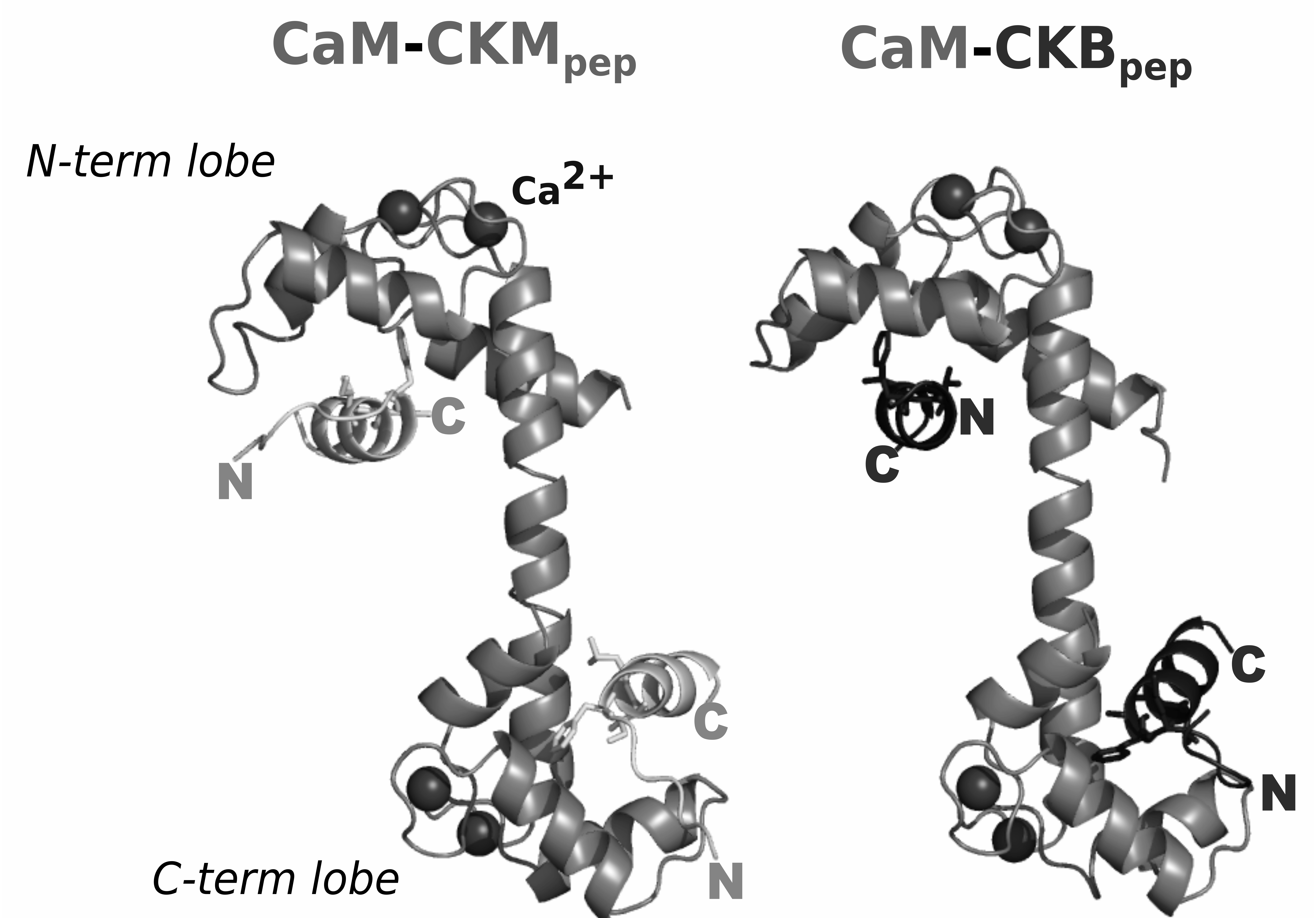